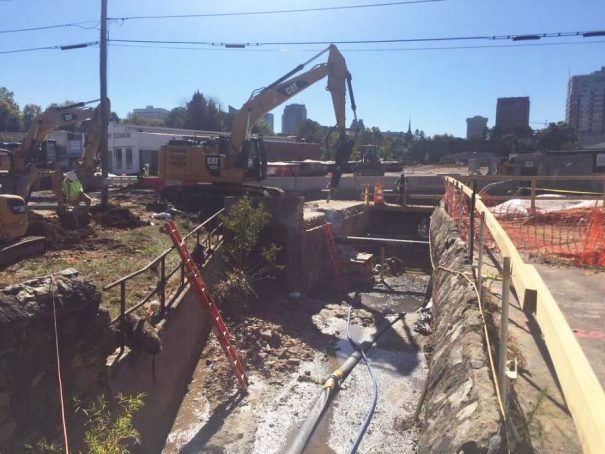 Crews are replacing two bridges in Raleigh — one on Capital Boulevard (U.S. 70/U.S. 401) over Peace Street and another on Wade Avenue over Capital.

The project is set for completion in November 2019. On a daily basis the bridge at Wade Avenue carries close to 35,000 vehicles a day, while the bridge over Peace Street has 61,000 vehicles.

The existing bridges have outlived their lifespan.

Built in 1948, the bridge on Capital Boulevard has a sufficiency rating of 44.9 (out of a possible 100), according to project website. The Wade Avenue bridge — built in 1954 — has a sufficiency rating of 34.1 and has a vehicle weight limit. Both bridges are classified as structurally deficient due to age. While the existing bridges are still adequate to support traffic, they are nearing the end of their design lives and need to be replaced in a timely manner.

The city of Raleigh approved its Capital Boulevard Corridor Study in August 2012, and property acquisition for the new bridges began in 2015. The NCDOT put in serious efforts to ensure that the bridge replacement projects will not restrict the city from completing future projects that fulfill its long-term vision for the area.

“The bridge at Peace Street will improve connectivity for that area of the city, linking downtown to the Glenwood South neighborhood and enhancing development that is already under way in anticipation of the project,” said Steve Abbott, NCDOT spokesman. “The addition of bike lanes and sidewalks along Peace Street will make it a draw for pedestrians and cyclists. And with the bridge artwork enhancements being paid for by the city of Raleigh, it will be an impressive entrance into the downtown area.”

The capacity of each structure will remain the same, with the Wade Avenue ramp bridge being a single lane in each direction, and the bridge over Peace Street being three lanes in both directions. Both projects were designed by planning and design engineering consultants Kimley-Horn.

The “trumpet-style” interchange at Capital and Wade Avenue is being replaced with a new trumpet-style interchange, with the new ramps placed next to the existing ramps so that traffic can continue to use the interchange during most of construction. Sidewalks are being added on both sides of Wade, and a new greenway will extend from West Street under the Wade Avenue bridge to the off-ramp from Capital to Wade. A new 10-ft. planted median is being added along Capital between Peace and Wade.

“You can’t predict the expected lifespan of the bridge but it should be for at least the next 50 years, if not longer,” he said. “Remember, we are not adding to the capacity of the bridges, but by bringing the design standards such as wider lanes up to date, they should be able to handle the traffic flow.”

A public meeting in August 2016 gave people a chance to see the final design and learn how the project would impact traffic.

Abbott pointed out that Raleigh motorists are being patient and understanding and appreciate the efforts by NCDOT to inform them about closures, detours, and construction updates.

“As there are changes to the traffic patterns on both bridges, we send out news releases, post updates on the project website and social media, and send updates out via our traffic information system [www.DriveNC.gov],” said Abbott. “That same information is available by calling 511. We also held a media availability with project engineers when we started the Peace Street part of the project, as it will have the greater impact on traffic patterns, and we have partnered with the city of Raleigh to help get the word out through its information systems as well.”

Construction began on the Wade Avenue bridge in September 2016, while work began on the bridge over Peace last summer.

“The major challenge on this project is relocating and installing the underground utilities quickly as to not impact our schedule,” he said. “Underground utility work must be complete before we can begin the roadway and bridge items, making sure that the unknown obstacles do not cause any conflicts. We are overcoming this challenge by performing utility investigations ahead of the construction and working closely with the city to verify the locations of the existing utilities.

“The Peace Street bridge is being built in two stages because existing traffic must continue moving at all times,” he added, “so you have to build stage 1 of the bridge first and flip traffic to the other side. Building bridges in a congested downtown area requires us to minimize the impacts on the travelling public. We are safely maintaining traffic and erosion control devices at all times to keep the job site clean — these quality controls are the key to a successful project like this.”

A major lesson also learned on previous projects is to fully complete segments of a project whenever possible to achieve optimal scheduling efficiencies.

“This is constantly on the minds of our crews and staff,” said Vilaret, noting that most of anticipated challenges have been encountered and addressed successfully. “A lot of coordination and planning has occurred with the DOT and the city through weekly coordination meetings. Additionally, daily onsite City and DOT inspectors working closely with us is a tremendous benefit to a successful project.”

Utilities such as AT&T, Duke Energy and PSNC also attend meetings and help us out rapidly when problems do arise.

“Thus far there have not been any major delays that held up construction,” said Vilaret. “Planning our work allows us to address unforeseen matters. The schedule is very tight but we have full support by all of our partners to resolve potential concerns quickly.”

For the Wade Avenue Bridge, all the substructure work has been completed and the deck pouring is 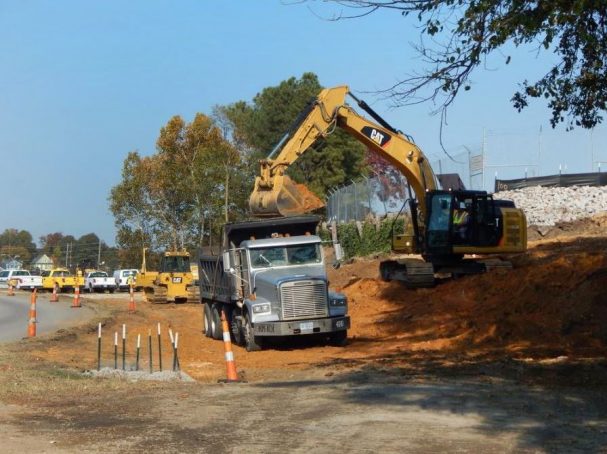 scheduled to begin on Nov. 15 — the decks are expected to be completed by Dec. 31. Phase 1 of the Peace Street Bridge will be completed in summer 2018.

“The piles have been driven in and we’re working on the MSE wall abutments, which will be completed by the beginning of 2018,” said Vilaret. “We’re anticipating Stage 1 completion by summer 2018.”

For the 2017 to 2018 construction season, the plan is to complete the Wade Avenue bridge by April and to start Stage 2 of the Peace Bridge next September, with completion scheduled for Nov. 1, 2019.

“Currently, the plan is to shift traffic on the southbound side of the Peace bridge so that we can open up median construction,” said Vilaret, who noted that Zachry secured a lay down yard adjacent to the project. “The lay down yard location has been huge for us in terms of staging and storing project materials such as beams, drainage structures, and pipe materials. Our office proximity very near the job site is also convenient and allows for quicker travel times.”

The work is being done with day and nights shifts, along with weekend shifts. Vilaret pointed out that the success of both shifts requires good communications. The day and night shifts have representatives from each shift attending the daily 6:30 a.m. meetings. The night crews change depending on the scope of work. Night activities include those where traffic is most impacted.

Between Zachry and subcontractor personnel, there are about 50 workers on site daily. The major subcontractors are: Fred Smith Company for aspahlt paving; Tricor Construction for MSE walls; Stratcon Contracting Corp for hauling; and Young Construction Co. for boring.

“Terry has 40 years of experience and Ray has more than 30 years,” said Vilaret. “They do a tremendous job, as do our experienced foremen and crews. We owe much of our success to this team.”

The amount of materials being removed is still being determined.

“All the concrete pavement that we remove from Capital Blvd. is being recycled on this same project as roadway base, which is processed by a crusher and stockpiled alongside the project,” said Vilaret. “This recycling process is working out very well.”

Bridge demolition is mainly done at night by saw cutting, with the bridge deck being removed in sections. Protective measures are being taken to prevent debris from falling into the Pigeon House Branch Creek and onto existing roads.

For this project, Zachry’s closest equipment yard/shop is the work site itself, which is manned by three onsite technicians responsible for daily and routine maintenance, oiling and lubing and fueling the vehicles and equipment.

For this project the company is using several pieces of Cat® equipment from Gregory Poole Equipment Company; including Cat 336, 325 and 320 excavators, a Cat D5K2 dozer, Cat 938 loaders, and a Cat 12M motorgrader.

“We have an equipment division and repairs are done on the same day,” said Vilaret. “Cat representatives only come out when special parts and service are order. Our equipment team also attend the daily meetings to discuss equipment issues. We are very happy with some of the IT systems in equipment as far as notifications for issues with equipment and the hour meters are more accurate than they have ever been. The GPS grade control is improving accuracy on our fine grade work, especially with our motorgraders.”

James Hill, Zachry’s equipment superintendent, said that the company places a lot of resources into upgrading the skills of its mechanics.

“We place a strong emphasis on safety training, utilize on-the-job training programs, order and look up parts and tools online and participate in team building exercises to improve the communication of our team,” he said. “We work closely with the dealerships’ and manufactures’ service departments when diagnosing equipment issues. We also like to make sure we stay up to date with the latest equipment developments that these companies have to offer.”

We use cookies to give you the best possible online browsing experience. By clicking the I AGREE button or continuing to use our website, you are consenting to our Privacy Policy.I AGREE