On land where his grandfather harvested tobacco decades earlier, Jimmy Williams worked a feller buncher to select cut a mix of pine and hardwoods on 71 acres now owned by the Army Corps of Engineers near Jordan Lake in Chatham County, North Carolina.

At another jobsite, not far away, logging equipment was being set up for J.M. Williams Timber Company’s next job. To keep his crew working consistently, Williams typically sets up equipment at two jobsites simultaneously. That way, when work is completed at a job his crew can move to a new site without losing a day’s work. 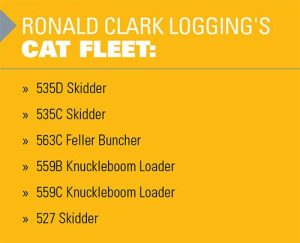 “It’s all about consistency,” Williams says. “I have two of everything, so I can have my equipment set up on two jobs.”

Mill quotas generally limit the amount of wood that he can haul each week. Consequently, Williams is more concerned with keeping the wood flowing, rather than producing as much as possible and then breaking the flow to move equipment to the next site. “If you don’t get your logs moved this week, they are gone forever. The mill will buy them from someone else,” Williams says. “My key is to stay consistent.”

His crew consistently produces 30 to 40 loads (30 tons each) per week. “We can do 50 loads a week, but it doesn’t happen but a few times a year,” Williams says. “People think the number of loads are going to do it, but it doesn’t. It’s part of the puzzle, but mills don’t let you do whatever you want.”

22-Year Tradition
An 18-year-old 527 Track Skidder with a six-way blade is used for construction of roads and landings and clean-up work. The tracked machine pulls drags out of the woods when mud makes sites inaccessible to other machines.

“The ground pressure is four pounds per square inch. That’s less than a 200-pound man with a size 12 boot,” Williams says.

“We’ve been running Cat dozers for 22 years. When they expanded into knuckleboom loaders and forestry machines, we purchased them, too. It was a no-brainer,” Williams says. “The Cat machines are reliable, and versatile. The filters fit multiple machines. That simplifies things.”

Cat machines meet the challenge of working in soil conditions in the region that range from clay to thick top soil. The 563C Feller Buncher runs on 44-inch tires to work in soft soil. “Some guys run dual tires, but I do select harvest so I can’t be 14-feet wide. I have to stay narrow,” Williams says. 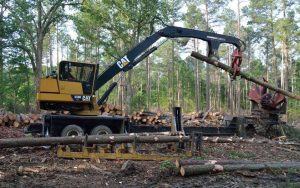 Cat dealer, Gregory Poole Cat, does an excellent job of providing service and parts to help keep fleet uptime high. “The beauty of it, they are never more than 40 miles away from my jobsite,” Williams says. “Their store in Raleigh stays open until ten o’clock at night. You can’t beat that.”

Parts are also supplied via drop boxes, and sales people bringing parts directly to the jobsite. “Customer support is top-notch,” Williams states. “They service machines under warranty and major components, and do a firstrate job.”

J.M. Williams Timber Company was founded in 1995 by Williams and his late father, James Williams, Sr. His grandfather ran a portable sawmill as a side business to the family’s main work of tobacco farming. As tobacco farming waned, his dad suggested starting a logging crew when Jimmy graduated from high school. “That’s exactly what we did,” Jimmy Williams says. “We mainly wanted to do select cuts. That’s what we specialize in today.”

At land owned by the Army Corp of Engineers and managed by the North Carolina Game Land Commission, the crew select harvested 71 acres, as well as clear-cutting 25 acres. The tree harvest helps improve wildlife habitat. “They want the trees far enough apart that the sun can touch the soil and have greenery come up,” Williams says. “We don’t harvest anything that produces a nut, no hickory or white oak. We try to cut out all the soft hardwood because it is so invasive. The sweet gums will take over.”

The work is on a contract with a mill, as is 90 percent of Williams’ business. “I might do ten percent for people that want to work directly with me,” Williams says.

Fully Loaded
With his emphasis on consistency, Williams has implemented onboard scales to ensure that trailers are fully loaded. Also, Williams purchased lightweight trailers, so more logs can be carried per load. The company has moved from trailers weighing as much as 13,000 pounds to 9,500-pound trailers “If I can only haul so many loads per week, I figured that I better get every ton that I can on each load,” Williams says. “They paid for themselves within a year.”

Trucks are lighter, by as much as 6,000 pounds compared to those he ran previously. “I can’t make it up on volume, so I try to make every load count,” Williams notes. 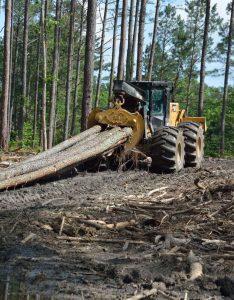 Hard work is another major tenet of Williams, including a memorable Thanksgiving Day with his dad. “There was a big rain coming and we were going through a guy’s yard. We would have lost a week, or totally destroyed this person’s yard, if we hadn’t worked that day. Daddy said, ‘We can eat turkey tomorrow.’”

“We always put work first,” Williams says, but adds that he is learning to take some weekends off from the job. “If you let it, the logging business will take every single moment of your life. It’s a dance, a balance that you have to learn.”

And the legacy of harvesting the bounty of the Piedmont Region, handed down from father to son for three generations, continues.