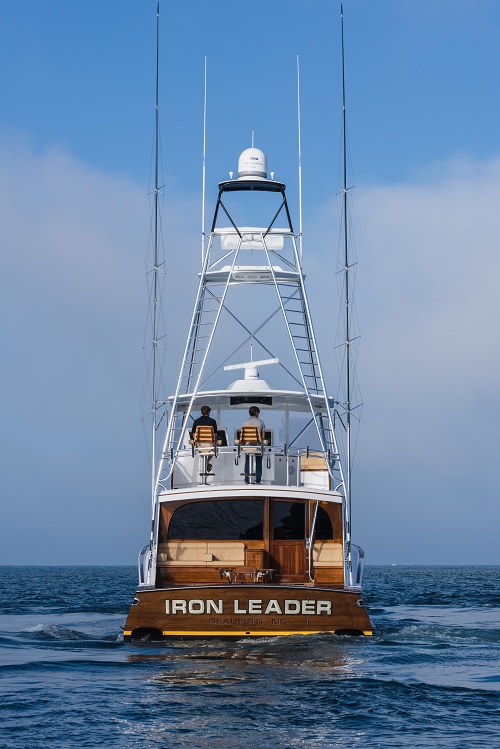 Launching originally in 2008 with a power package by another engine manufacturer, the 70’ Jarrett Bay was the perfect option for Caterpillar to use as a test platform for the new 2,433 mhp C32B marine engines. Comparable data such as performance numbers, stability, maneuverability, and much more have been analyzed and used for research and development.

Gregory Poole Marine in Beaufort, North Carolina installed the next generation of 12-cylinder diesel engines that provided a significant on-the-water performance boost thanks to the new sequential 3-turbo air system.  Now equipped with more horsepower in a smaller footprint, additional systems have been added to the vessel, such as two Seakeeper 9 gyro stabilizers, and a Furuno full-circle scanning sonar.

These additions still afforded an improved top end speed of 46 knots, a bump from the competitor’s engines which saw a top end speed of 43.7 knots.  The cruise speed increased from 34 knots at 1900 rpm to 38 knots at 1900 rpm, hole shot times increased from 54 seconds to WOT to 35 seconds to WOT, and one of the biggest benefits was a reduction in noise, going from 79db at 600 rpm in the cockpit to 77db at 600 rpm in the cockpit.

Follow us on social media for updates, tournament news, and more!

Episode One: Out With The Old

The first new 2433 mhp Cat® C32B marine engines were delivered to Jarrett Bay Boatworks, one of the world’s premier builders of customer sport fishing boats, in early 2021. In this three-episode video series, you get to go behind the scenes as the Jarrett Bay team repowers one of its own boats, Hull 48, with these faster, quieter, more powerful engines.

In the first episode, learn more about Hull 48’s notable R&D history, discover some of the key factors to consider as you’re planning a repower and go inside the engine compartment to see how the team removes the existing four-ton engines (hint: very carefully).

Tune into episode two of this three-part series to see exactly what it took to install new 2433 mhp Cat® C32B marine engines in this sport fishing vessel. You’ll also get a look at the reinstallation of the boat’s back bulkhead — a precision process to ensure everything lined up perfectly — and discover the special meaning behind Iron Leader’s name.

It’s the grand finale of Jarrett Bay Insider’s repower video series, and you won’t want to miss this look at the Iron Leader in action. In episodes one and two, you saw the removal of this sport fishing vessel’s old engines and the installation of the new 2433 mhp Cat® C32Bs. In episode three, it’s time for sea trials.

Watch as the newly repowered boat hits the water for the first time, go inside the all-new engine room and find out how the new engines perform right out of the gate. A significant increase in top speed, drastic reduction in smoke levels, much quieter operation, and increased stability for a great fishing platform are just a few of the rave reviews the C32B engines received from those on board.