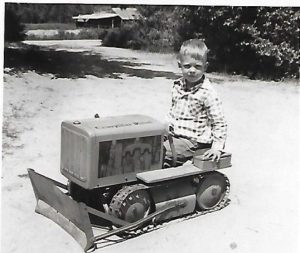 The Raleigh Construction Service team is using their free time to clean it up and restore it. Thank you to Donald and his family for all they’ve done to help build our great state of North Carolina over the years! 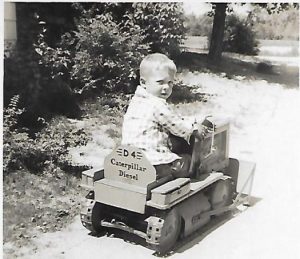 In the early 1940s, George A. Ford conceived the idea of manufacturing small, metal, pedal-powered replicas of the Caterpillar D4 tractor for use as toys for children. Ford founded the New London Metal Processing Corporation in 1948, and production of the D4 pedal tractors began shortly thereafter.

The company started creating a more popular electric powered version of the tractor in the 50s, and after the Korean war, it moved to Mystic, Connecticut and was renamed the Power Car Company. They began producing more electric powered cars as well, like the T-Bird Jr., and remained producing until in to the late 1960’s.

When these D4 tractors were being produced, Cat Dealers, like Gregory Poole, would give these to the children of those who purchased new Cat machines.

Donald was willing to give us a little background on the history of his family, and how they’ve interacted with Gregory Poole throughout the years, as well as the background of this specific D4 tractor car.

My father’s company was incorporated June 18, 1956: D.L. Matthews Inc. in Fayetteville, NC.  He had been in the construction business essentially since he returned from WWII.  He was in the 101st Airborne, as a paratrooper.  In the beginning, he did a lot of land clearing and moved more into the grading end of the business— streets, sewer, storm and sanitary throughout the years.  The only thing he didn’t do was paving.  During the period between 1960 to late 1982 his company did many subdivisions, road and street work in the Fayetteville area.

His affiliation with Caterpillar and Gregory Poole Equipment Company started in the very beginning.  I always remember Caterpillar equipment around, and I am sure he started with bulldozers and built up.  I remember, as well as bulldozers, frontend loaders, scrapers, motor graders, 619’s and later 631.  I spent a lot of time running the scrapers when I was home in NC.  His history with Gregory Poole started in the beginning as well, and lasted until 1982 when he sold the business.  I can remember many trips to Raleigh with my father for parts and to look at new equipment.  I also remember meeting Gregory Poole Jr. on at least one of the trips to Raleigh. As well as many service calls from Raleigh to Fayetteville.  When Gregory Poole opened the branch in Fayetteville, my father helped to move a lot of the equipment.  I can actually remember being home for a visit and moving a brand new loader myself. 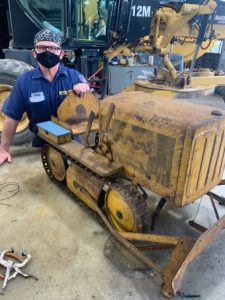 As for the D4 tractor car, I cannot specifically remember receiving it as a present, but do know that it had to be in the late fifties.  As I understand it came from Gregory Poole as a gift for the purchase of equipment.  I remember playing with it, and if you look at the pictures, I was pushing pretty hard with the blade bent!  Obviously, when I became older there was no way we were going to get rid of it.  It spent many years in the top of the garage and I only got it back down within the last few years.  My father passed away in December 1982 and my mother September 2020.  I returned to Fayetteville in July 2020 to help with my mother, and since her passing, we were wondering what would be the best way to preserve the little D4. Ultimately, we felt it would be great to get it back to Gregory Poole to hopefully display it for others to see.  As you can see it’s quite old and rare.